WHOOP-­Szo presents Niizhwaaswo, the third and final document of their adventures in Arctic Canada.
Technically these songs came first, recorded to 4 track at home, but finished while in the north.
It melds elements of sound collage, disjointed parts, complex arrangements, and supreme momentum to weave sonic stories, all at once disorienting and enjoyable.


Following the release of a double album representing the band’s time spent living and working in the Inuit community of Salluit, Quebec, WHOOP-Szo are set to release a third and concluding set of recordings gathered from those experiences. The circumstances under which these albums were born are both remarkable and inspiring, I would highly recommend listening to an interview that band member and Out of Sound Records founder Adam Sturgeon did recently for campus radio in which he touches on the process.


Jan. 3rd” is the first track to debut from their new record Niizhwaaswi and it already feels like my favourite WHOOP-Szo track to date. Written prior to leaving for the north and finished while in Salluit, the track exudes an audible warmth fitting of the K Records catalogue. The sincerity and earnestness with which the band executes their songs was one of the elements I felt allowed the band to succeed in exploring such a diverse range of sounds on their earlier release, Qallunaat/Odemin. Those same elements are ever-present on this track and the more minimal instrumentation allows for each sound to sink in even further. Make sure to grip the first two parts in this series out on beautiful silkscreened packaging and if this track is any indication you’ll be back for more soon.

"men will fight for superstition as quickly as for the living truth -- even more so, since a superstition is intangible, you can't get at it to refute it, but truth is a point of view, and so is changeable" -
Hypatia of Alexandria ( taken from Dark Lark liner notes/Construction & Destruction) 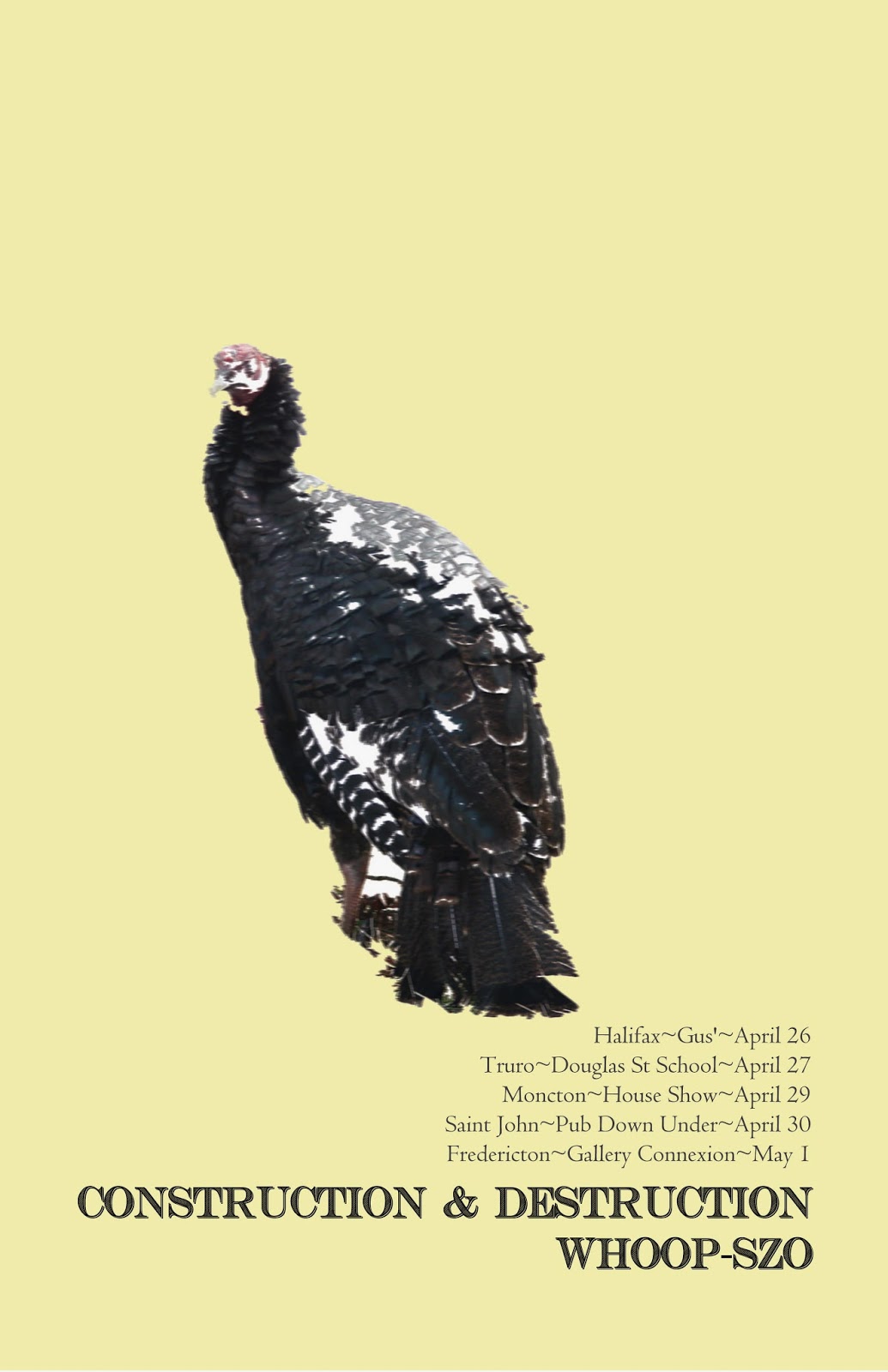 Arty, spastic, dynamic and entirely unique, you won't find another band like WHOOP-Szo. With a cast of members roaming in and out of Guelph, this band of creative counterparts combines sound collage, disjointed parts, complex arrangements, and supreme momentum to weave sonic stories, all at once disorienting and enjoyable. Their most recent release is a double-album entitled Qallunaat/Odemin (via Out of Sound Records), which was recorded during a purposeful visit to the Northern Village of Salluit, QC. Sipping on the psychedelic sound of WHOOP-Szo, one can delight in a far-reaching rainbow of tones.
WHOOP-Szo partake in the tangible this spring:

Our very first: a collaborative project/a review with a voice/a release with some heart

From the Qallunology of Benoit Poirier:
(Translated by Benoit Poirier)
A binomial of pancanadian ubiquity framed on the Guelph-Salluit polar vector, Qallunaat/Odemin feels the scope of passing time and attests of the humility of the voyageur/guest. An incremental project (its third flap part is already in the works) in which intimate fires are woven of quiet plains and mountains, of troubled waters and storms, warm like a midnight sun: hope is gray like that, tacking between arable rock and carved folk with a propensity for the tragic. Kudos to the Out Of Sound Rezonance Program, an initiative from the OoS label which allows young Inuits to take part in different steps of the DIY gestalt of an album (here, the silk-screening of the cover art, and some back vocals). Of quiet plains and mountains, of troubled waters and storms, Qallunaat/Odemin is an abundant oxymoron as vast as the Canadian Shield.
from our friends at Weird Canada
//////