So, we are elated and pleased to announce that WHOOP-Szo have finished the first of three new EP's to be released in 2013... it's a bit excessive we know, but it's been a long time coming.

Stay tuned for more info and leaks! In the meantime we've decided to post a semi-unreleased b-side from the Debut EP - What I Dream is Where I Live. Seeing as it's colder than a witches tata (we love witches, WTCHS and Wicked Witches btw) in Noisy Mountain country, it's appropriately titled:
....Go Out.

...Go Out (b-side), by WHOOP-Szo
thenoisymountain.bandcamp.com
from the album What I Dream Is Where I Live
at 10:35 No comments:

Out of Sound's Scrappy Little Bro

In the words of Say Domino....

Thank the skies for our tenacious little bro though: 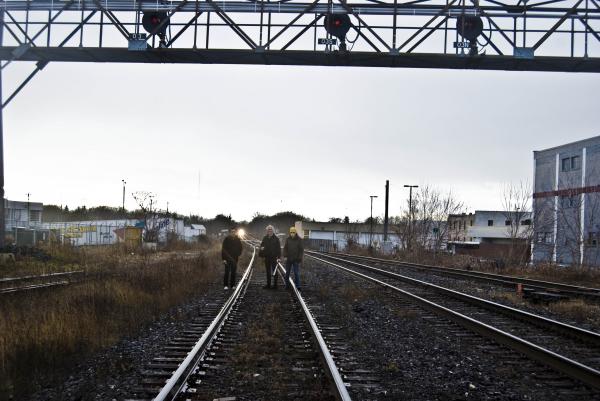 Out of Sound Records is very pleased to announce that it's youngest band SAY DOMINO was listed in a recent NXNE announcement:  The NXNE Year-End Top 60 Tipsheet: http://nxne.com/tipsheet/

Sharing positions with bands like: Cold Warps, Odonis Odonis, Yamantaka//Sonic Titan, Needles//Pins, CTZNSHP and more… that's pretty good company for SAY DOMINO. The list compiled by NXNE HQ seeks to curate a list much like the festival itself; shouting out to some familiar names as well as introducing some new ones. For some SAY DOMINO may be new to NXNE but to London ON, they are a household name, having been around since some of the members were pre-teens. Don't let that adolescence guide you, SAY DOMINO are loud and in charge. They've shared stages with Growlers, Junior Boys, Yukon Blonde, Ladyhawk and METZ and hold their own just fine. Self-described as "Eclectic Grunge!!?!??!", we really couldn't describe it better ourselves.

2012 saw the release of a beautiful, silkscreened split 7" with label mates WHOOP-Szo and Lonnie in the Garden entitled TRI-PIE  (three bands of a psychedelic nature):
http://outofsoundrecords.bandcamp.com/album/tri-pie-7

And now, this announcement comes hot off the release of an extended tour and Cassette Single appropriately entitled: The Cold Bodies Tape
http://outofsoundrecords.bandcamp.com/album/cold-bodies-tape

FUCKKKKKKKKKKKK yeah!
at 17:01 No comments: