I Smell Blood hit the road

Our favourite noise-punk/instrumental duo I SMELL BLOOD, will be heading out with Out of Sound Alum SAY DOMINO in support of a new split release. Recorded by Denholm Whale (ODONIS ODONIS, CARTOONS)to 4-track, Eastern Canadian cities and towns will be getting a serious dose of why London ON is finally on the "Canadian Music Map". 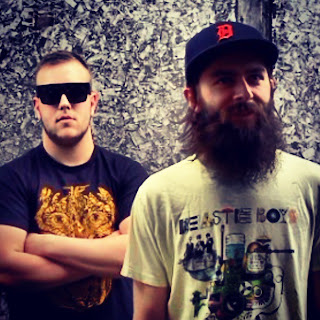 Say Domino are fresh off playing Weird Canada's first-ever London showcase on Record Store Day 2013, and recording new tracks for a TBD release later in the year. Featured on NXNE's '2012 Top 60 Tip Sheet' and have spent the last few months plotting a new release and playing shows with Soupcans, Hussy, Das Rad, Phèdre & The Growlers etc...
I Smell Blood had a great 2012, celebrating a split-cassette release w/ CROSSS through Hamilton DIY label PERDU, and a split 7" release through Out of Sound Records w/ Wild Domestic, WTCHS & Bleet. ISB is a full-frontal assault on your oratory senses. They've had a busy 12 months, opening for the likes of Japanther, Child Bite, Tera Melos & METZ . This is the band's first full-tour, and first time foraying out into the euphoric bliss that is Eastern Canada.
Both Bands were featured on the Out of Sound PIE-SERIES, an on-going 7" compilation series:

Thanks be to the fine promotions team that is EXHALE/Everything's All Right Forever,
WHOOP-Szo and Lonnie in the Garden are proud to take part in their most excellent new Compilation as they celebrate their inaugural season of bookings:

We swear every band on this thing is killer. Tour buds Sheepman and Walrus, recent label signee from Perdu in Hamilton; WTCHS. Roberta Bondar, Grime Kings, Psyche Tongues and more..... shit, this is one of the best comps I've heard in a while. a long long while.

If you wanna know where the Grickle Grass grows you better shake your legs, you better wiggle your toes!

On May 25, 2013 we present the 4th Annual Grickle Grass Festival. There is no other festival of its’ kind in Canada. Held in the historic London Children’s Museum, this unique event offers family programming during the day, with the help of Growing Chefs! Ontario. The daytime programming places emphasis on community - sustainability, making healthy choices, and of course, fun! As the sun sets and the kids go home, the Grickle Grass Festival offers adult patrons the exclusive chance to party in the rooms and corridors of their cherished childhood memories as the Children's Museum is transformed into a fully licensed night of music.

Curated by local, independent record imprint Out of Sound Records and 379 Collective, we are overjoyed to present this year's truly diverse, interactive and cutting edge line-up: